Born in 1958, Peter Woytuk was introduced to the artistic considerations of architecture by his father. Peter Woytuk, Sr., who took the family on a six-month tour of Europe, concentrating on significant architectural sites. Woytuk went on to major in art at Kenyon College in Ohio, focusing on photography; however, creating welded sculpture captured his interest and upon graduating in 1980, he took an apprenticeship with sculptor Philip Grausman. While working for Grausman, he absorbed a sense of the “convex and concave” form. He also developed the technical knowledge and skills needed to create cast sculpture. By 1986, Woytuk was showing his work in solo exhibitions and has continued to garner attention for his work. In 1998, a commission from the North Carolina Zoological Society resulted in four life-size bronze elephants for the park’s entrance. He is represented by Owings-Dewey Fine Art in Santa Fe, NM; Anne Reed Gallery in Ketchum, ID; and Denise Roberge Gallery in Palm Desert, CA. Woytuk and his wife divide their time between working at their foundry in Thailand and working in Santa Fe, NM. 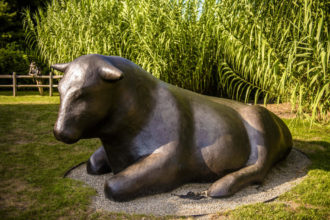 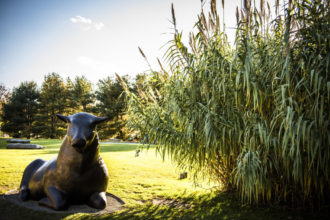