Mark Mennin was born in Cedar Falls, Iowa and grew up in New York City. He graduated with a degree in History from Princeton University, where he also taught ceramics under Toshiko Takaezu. He began to carve stone in Italy in 1984, and worked there for three years, executing commissions and preparing what would be the first of many solo shows in New York at Marisa del Re, Victoria Munroe, among others. From 1989-1993, he lived and worked in Paris, where he exhibited with Galerie Enrico Navarra and began a series of commissions in the south of France, in Ramatuelle and Le Muy.
In recent years, the scale of his sculpture has evolved to giant landscape and architectural works, often involving hundreds of tons of granite. This prompted a full move from New York to a large indoor-outdoor atelier in Northwest Connecticut. Even at this scale, the skills he honed in Italy are paramount to his work.
He does all the carving himself. He has produced a large body of work for both private and public collections, including the fountain and installations at New York’s Chelsea Market, Stanford University, Penn State University, Bruce Park in Greenwich, Connecticut, Laumeier Sculpture Park, The DeCordova Museum, New Harmony, Indiana, Delbarton School in Morristown, New Jersey, SUNY Staten Island, and the Hotchkiss School, Lakeville, Connecticut.
He has taught sculpture and Art History for over twenty years, serving as an adjunct Professor first at Parsons School of Design, and The New York Academy of Art in Manhattan. He now lives and executes all of his sculptures at his studio in Bethlehem, Connecticut where he lives with his wife, writer Marcia DeSanctis and two children. 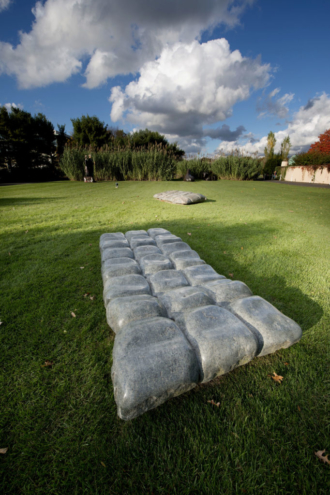