Jay Wholley received a BA from Dartmouth College, Hanover, NH and earned an MFA from the University of Colorado, Boulder, CO. He has taught at Ramapo College of New Jersey since 1971, and has been a visiting artist at other campuses across the country as well. His works have been shown at The Detroit Institute of Arts in Michigan; the Oakland Museum of California, the Whitney Museum of American Art and New York’s OK Harris Gallery, and other well-known museums and commercial galleries. Wholley was a featured artist in the Spring 1997 and 2002 Exhibitions at Grounds For Sculpture. Additionally, he has been given one-person shows at many university galleries, including the Dishman Gallery, Lamar University in Beaumont, TX; Rosefsky Gallery, State University of New York, Binghampton campus; and Rutgers University, New Brunswick, NJ. He recently exhibited several works in Grounds For Sculpture’s 2011 exhibition, ‘White Hot: Expressions in Iron’ 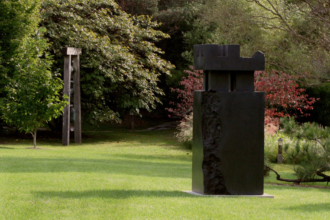