Seward Johnson, Confrontational Vulnerability, 2011, styrofoam, 144 in x 246 in x 96 in, Collection of The Seward Johnson Atelier

Grounds For Sculpture (GFS) is home to a wide variety of native and exotic trees and plants. Though hard-pressed to pick favorites, GFS Horticulturist Janis Napoli considers these trees and features to be particularly notable.

Click the (+) to read a short description, and be sure to view the slideshow below.

Located just beyond the Red Maple Allée, visitors can find three concentric rings of trees, creating an envelope around Dana Stewart’s “Beast” series of work. Like many of the areas on the grounds, the area that came to be called Maplehenge resulted from an iterative process over roughly ten years. First, a ring of maple trees was planted, followed by an outer ring of pear trees. These provide a shaded canopy on even the hottest of days. Next, Michelle Oka Doner’s Ice Ring and Radiant Disk were installed in the center of the space. Then Dana Stewart’s ‘beasts’ were installed. The final planting included English Yew hedges to create an enclosed, private space. The finishing touch, an ornately carved wooden door from Afghanistan, was installed on a special foundation in a custom frame as the entryway to this space. Find this hidden doorway and enter the secret room inside this shaded glen.

A collection of evergreen and deciduous shrubs which flower in late winter and early spring with fragrant blooms. Contained here are Edgewarthia, Witchhazel, Winterhazel, Lenten Rose, and bulbs. The Winter Garden is adjacent to the Monkey Puzzle Tree, near the Maple Allee and Nature’s Laugh.

Look but don’t touch! This area gets its name because all of the plants here have aggressive spikes or thorns. Centered around honey locust trees, also known as thorny locust, the Pain Garden also features several other types of spiky flora including trident maple, pyracantha, trifoliate or hardy orange, barberry, and castor-aralia.

While the original vision for this location was to create an underground art gallery complete with hologram projections, the concept plans never managed to become a constructed part of Grounds For Sculpture. However, a huge pile of soil collected from nearby construction sites on and off property eventually grew large enough to allow for the Olympia Hill to be built. This garden feature showcases Seward Johnson’s Confrontational Vulnerability (based on Manet’s painting entitled Olympia) and contains a rain garden where weeping Norway spruces, grasses, ornamental shrubs, and roses enhance the swooping, layered pathways.

The Fairground Woods contain some of the oldest, largest trees at GFS, some of which may have predated the Fairgrounds. This grouping dates to the early footprint of the former fairgrounds, as evidenced by a photo dated from 1925. Within this grove of trees one can find “Bicycle Beech,” a tree that is estimated to be around 100 years old. The name was adopted after one of the merry pranksters in the early days of the sculpture park thought it would be amusing to carry a bicycle way up into one of the trees here. “Bicycle Beech” has since grown around its two-wheeled invader. That tree and a sweetgum both predate GFS; the  linden and locust trees in this location were transplanted here over the years since GFS was established. Also present are some unusual understory shrubs such as Illicium and Pawpaw and other woodland specimens.

The Meadow
The Meadow is a seven-acre addition to the grounds, purchased in 1999 and opened to the public in 2014 with its inaugural exhibition, Steve Tobin: Steel Roots. Initially cut off from the rest of the property by a shopping center’s access driveway, it was eventually united with the rest of the sculpture garden and The Meadow was opened. The area was planted with meadow grass and wildflowers across the seven acres and on a newly constructed berm. More than 100 bald cypress trees were planted along the main path. Though they are young and slender now, over their lifespan, these trees could grow as tall as 125’ tall and six feet in diameter. Also included in this area are a set of dead locust tree trunks from trees that had to be cut down for a parking lot expansion. Their sculptural forms were sited here along with custom made metal brackets so that they can continue to stand as part of the landscape.

The Wildflower Berm
This selection of flowers is well suited for the northeast and includes 25 species including Blanket Flower, Cosmos, Phlox, and more. These flowers attract pollinators and people. We are excited to have this naturally wild and beautiful planting, which begins bloom in mid-  to  late- summer.

Southern Live Oak ‘Quercus virginiana’ and Escarpment Oak ‘Quercus fusiformis’
Planted recently at Grounds For Sculpture just east of the ring of Dana Stewart sculptures, adjacent to Maplehenge, guests can find two young Southern Live Oaks and one Escarpment Oak. While these trees are typically found further south, recent development of new cultivars has pushed their viability into our region. Recognized for their stately presence (think “Gone with the Wind”), these trees are most often found from the Carolinas to California.

Diamyo Oak ‘Quercus dentata ‘Pinnatifida’
This cut leaf oak is a rare, prized specimen located next to the Escarpment Oak, just east of the ring of Dana Stewart sculptures and Maple Henge. It is described as a “Holy Grail” tree, which means it is a rare and unusual tree sought by collectors and enthusiasts.

Monkey Puzzle Tree ‘Araucaria araucana’
Located near the Winter Garden by the wall just past the Red Maple Allee and heading towards Rat’s Restaurant, this tree is named for the Araucana people from the mountainous region of Chile. It has triangle shaped leaves and is quite spiny. The intricate twisted branches and scale-like bark are notable features distinguish this tree.

Mohr’s Pine ‘Pinus strobus ‘Mohr’
A recent gift, this collector specimen is located near the gazebo by the Lotus Pond. Notable for its rarity, it is a new garden-cultivated hybrid. It is a young white pine, and we are curious to see how it grows over the next decade.

Chinese Fringe Tree ‘Chionanthus retusus’
Native to China, these trees produce beautiful and slender fringelike petals in late spring. Two can be found along the lake in the vicinity of the warming hut path.

Korean Sweetheart Tree ‘Eucaphis japonica’
Relatively unknown, this small tree has an insignificant flower which produces a red heart shaped fruit. Native to Korea, it is recognized by its beautiful bark and purple fall leaf. GFS has one of these unusual specimens,  located along the lake between Doubles and Déjeuner Deja Vous.

Crepe Myrtle ‘Lagerstroemia Indica’
Late summer bloomers, there are several of these trees at GFS. They can be found on the Olympia Hill as well as in the Water Garden and Acer Courtyard. Blooms are crepelike petals in colors of pink, white, or purple. The bark is unique – very smooth and muscle-like in appearance, and in some cases can look more like someone’s arm than a tree.

Seven Sons Tree ‘Heptacodium miconioides’
This unusual specimen comes from Southeast Asia and is known for its small creamy white flowers  which bloom in late summer and produce a red fruit surrounded by red bracts, which look like a second bloom.  Each cluster contains seven tiny flowers (hence the name heptacodium), which are followed by an equally showy red fruit in fall. Two of the trees can be found along the pond opposite the Hedgerooms. 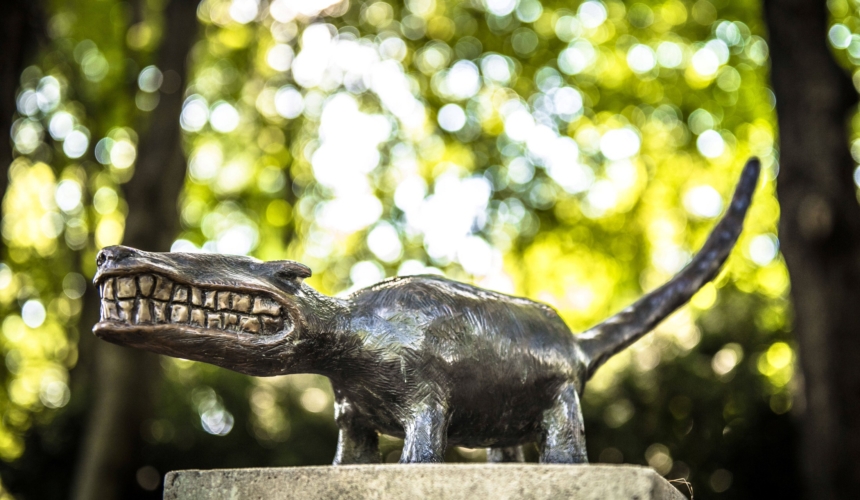 A visual tour
Maplehenge
A ring of beasts! Maplehenge is the perfect lair for Dana Stewart's "Beast" series. Find this family of work and you'll be standing under Maplehenge's canopy. At its heart, you'll find Michele Oka Doner's "Radiant Disk" and "Ice Ring". A visual tour
Southern Live Oaks
Two young saplings have recently been added to the horticulture collection at GFS. When mature, their gracious sprawling branches will provide shade cover and southern charm to the edge of the gently sloping hill where they are sited. A visual tour
Escarpment Oak
This full and hearty specimen is common to central and south Texas, and is much-admired and highly desired for its size and sturdiness. As with its neighboring Southern Live Oaks, when mature, it will create abundant shade. A visual tour
Diamyo Oak
A closeup of the cut leaf 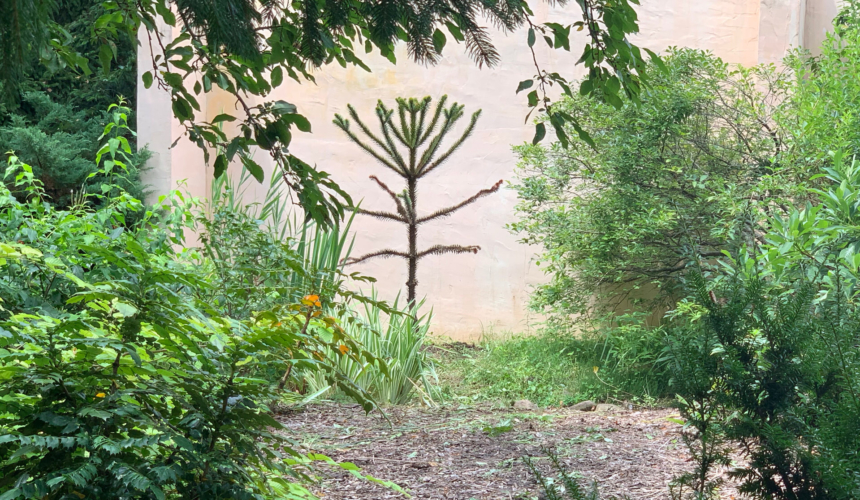 A visual tour
Winter Garden
A peek through the Winter Garden offers a framed view of the Monkey Puzzle Tree. A visual tour
Pain Garden
One of the thorniest in our horticultural collection, the Hardy Orange at the end of the Sculpture Pad between Bruce Beasley's "Dorion" and Seward Johnson's "Has Anyone Seen Larry" presents blooms in early spring and fruit in summer. A visual tour
Pain Garden
The fruit of the Hardy Orange is roughly the size and shape of a golf ball. The pale green orb is covered with a light velvet fuzz.
Stay up to date with the latest news and announcements from Grounds For Sculpture
Sign up for our newsletter