Born in Serbia, Zoran Mojsilov attended the University of Belgrade from 1975 to 1979. He later emigrated to the United States and now resides in Minnesota. Since the late 1980s, Mojsilov has regularly shown his sculptures at galleries, college campuses, and museums in this country, including such noted art institutions as DeCordova Museum and Sculpture Park in Massachusetts, and Socrates Sculpture Park in New York. Recent one-person shows were given to Mojsilov by the Art Gallery at Rochester Community and Technical College, the Conkling Gallery at Mankato State University, and Thomas Barry Fine Arts, all in Minnesota. His sculptures are in collections at the North Dakota Museum of Art, South Bend Art Center in Indiana, and Runnymeade Sculpture Farm in California, among others. He was commissioned to create the Camden Gateway Project, Minneapolis, in 1996. Cuckoo’s Nest was previously installed at Pier Walk ’98, an international exhibit of outdoor sculpture held annually in Chicago since 1995. 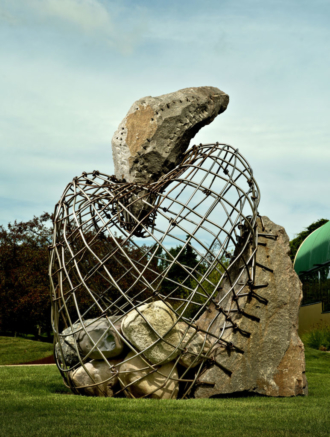