Yuyu Yang (1926-97) was a prominent sculptor in Taiwan and China. Originally from Taiwan, Yang began his education at the Fu Jen University in Beijing, China. He went on to study architecture at Tokyo Academy of Architecture, Japan. Due to the advent of World War II, Yang returned home to teach at the National Taiwan Normal University. Eventually he made his way to Italy to study in the sculpture department of the National Academy of Rome. From the early 1950s into the 1970s, Yang’s work evolved from traditional expressionism to simple abstract forms. He has worked with a variety of materials including paper, cloth, wood, clay, bronze, iron, marble, and stainless steel. During the 1990s, he turned almost exclusively to stainless steel to simply and eloquently express the thematic symbols that appear frequently in Chinese philosophy. His work is included in the collections of many prestigious private, corporate, and museum collections such as the Smithsonian Institution, Washington, D.C.; Sunrider Museum, Los Angeles, CA; World trade Building, Kaoshiung, Taiwan; Taipei World Trade Center; Taipei Fine Arts Museum; National Museum of Contemporary Art, Rome, Italy; The Vatican, Rome, Italy among many more.

In 1992, he founded the Yuyu Yang Lifescape Sculpture Museum in Taiwan, managed by the Yuyu Yang Foundation (http://www.yuyuyang.org.tw/). Its purpose is to organize exhibitions and provide materials to encourage a better understanding of Yang’s work, in addition to holding other activities in promotion of the arts. Yuyu Yang died in Hsinchu, Taiwan in 1997. 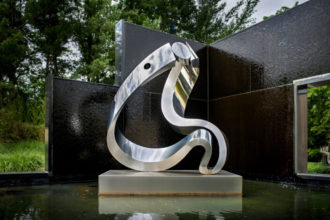 Dragon’s Shrill in the Cosmic Void