Nina Levy attended Yale University and graduated with a Bachelor’s degree in English and art, then received an M.F.A. from the University of Chicago in 1993. Since finishing graduate school, Levy’s sculptures have been featured in many exhibitions in galleries located in several major American cities. These include one-person shows at Peter Miller Gallery and The Cultural Center, both in Chicago, and Terry Dintinfass Gallery in New York City. Sculptures by Levy were on view in outdoor installations at the Museum of Contemporary Art, San Diego; the Sculpture Center at Roosevelt Island, New York City; and The Milwaukee Art Museum, to name a few. In 1997 Levy was awarded the Emerging Artist Residency at Socrates Sculpture Park in Long Island City, NY. She has also been represented at several Pier Walk exhibitions in Chicago over the last several years and Centaur was shown there in 1998. This artist now resides and has a studio in Brooklyn. 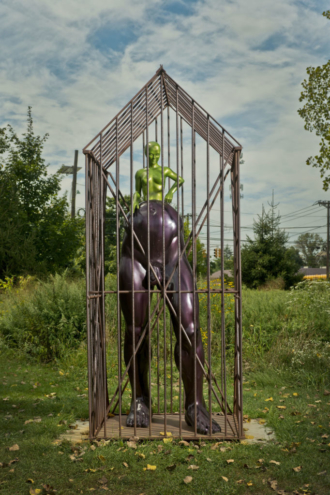