Lila Katzen said of her pieces in all media: “I feel marvelous when my works find a home. They are like my children. They are my links to the past. They are what I am.”

Born in 1932, in Brooklyn, Katzen began studying painting at the Art Students League. She continued her studies and earned a BFA at The Cooper Union, New York City. Katzen later attended the Hans Hoffman School of Art in New York and Provincetown, MA. An accomplished painter, in 1955, Katzen had her first solo exhibition at the Baltimore Museum of Art. In 1962, Katzen accepted a position at the Maryland Institute, College of Art—she remained on the faculty until 1980. An encounter with renowned sculptor George Segal in 1964 prompted Katzen to focus her attention on sculpture, and she became interested in Minimalism. Her sculpture, Liquid Tunnel, comprised of light and fluorescent liquid, for the 1970 Sao Paulo Biennale won her international attention. During the early 1970’s, Katzen moved away from the philosophies of Minimalism, and instead, chose to create works that encouraged human interaction. This decision led Katzen to push stainless steel and aluminum to creative heights in the 1980s and 1990s—resulting in works that were not only aesthetically striking, but laden with meaningful content relevant to society and humanity. Katzen passed away on September 20, 1998 in New York City.

During her prolific career as an artist, Katzen was awarded a number of solo exhibitions including shows at the Montgomery Museum of Art in Alabama (1996) and Lila Katzen: Force I at Wichita State University’s Edwin A. Ulrich Museum of Art, Kansas (1995)—her participation in group exhibitions is equally extensive. Her works are in collections at the De Cordova Museum and Sculpture Park, Lincoln, MA; Baltimore Museum of Art, MD; the Birmingham Museum of Art, AL; the Chrysler Museum of Art, Norfolk, VA; the Georgia Museum of Art in Athens; the National Gallery of Art, Washington, DC; The J. Paul Getty Museum, Santa Monica, CA; and Wadsworth Atheneum Museum of Art, Hartford, CT. 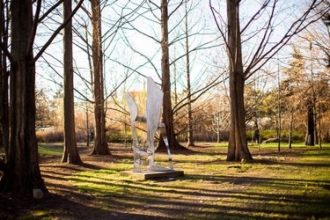