Born in Flushing, New York in 1952, Newman moved to New York City in the early 1970s. As a result, Newman came of age surrounded by not only a heightened political and cultural climate, but he was responsive to the various movements in art–Minimalism, Arte Povera, and Conceptual Art. Newman began his formal art education in 1972 with an independent study program at the Whitney Museum of American Art in New York. He attended Oberlin College in Ohio in 1973, and later, received an MFA from Yale University School of Art in 1975. From 1992 to 1998, Newman was the Director of Sculpture at his graduate alma mater. He continues to live and work in New York City.

Newman’s works are featured in numerous museums and public collections including the Albertina Museum in Vienna, Austria; The Metropolitan Museum of Art and the Whitney Museum of American Art in New York City; and the National Gallery of Berlin, Germany. His sculptural oeuvre spans 29 years of solo exhibitions, group shows, and commissions. 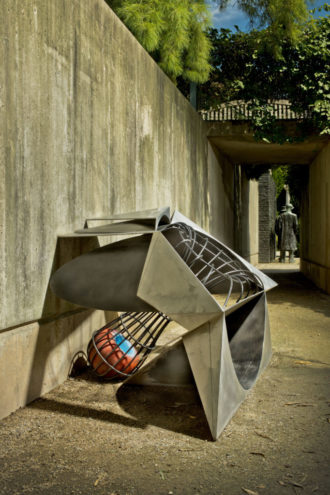