James Barton, a resident of New Jersey, received a M.F.A. in 1978 from Syracuse University in New York and prior to that a B.F.A. from S.U.N.Y. at Potsdam in New York. In addition, Barton has served as an Advisory Board Member of the Glass Foundry at Sand Point in Seattle Washington and as a Steering Committee Member and Site Host for the International Conferences on Contemporary Cast Iron Art. He has also taught at Lycoming College in Williamsport, Pennsylvania, at Cazenovia College in Cazenovia, New York, and at Syracuse University. Barton has shown his sculpture in museums and galleries throughout New Jersey, New York, and Pennsylvania. 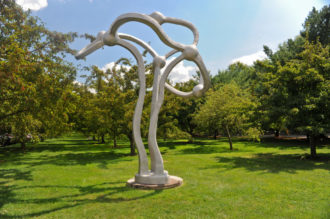