Born in 1938 in Garderen, Holland, Van de Bovenkamp was introduced to the arts at an early age. In 1957, he studied architecture in Amsterdam and later that year, following his family’s emigration to Canada, he attended the University of Michigan to study sculpture and architecture. During his first year, he was an apprentice to Richard Jennings, sculptor of large kinetic fountains. This early knowledge and experience of creating fountains later aided Van de Bovenkamp as he took on large-scale public commissions. Examples include: Mushroom Water Garden (1966) at Levitt Headquarters in Lake Success, NY; Springmist (1988) in Spring Lake, Chicago, IL; and Clouds (2000) in Toledo, OH. Upon graduating from college in 1961, Van de Bovenkamp moved to New York City in order to pursue his dream of becoming a sculptor. Throughout the years he has continued to work on variety of public commissions and has created several series of sculptures—gaining much recognition for his “Circles & Waves.” 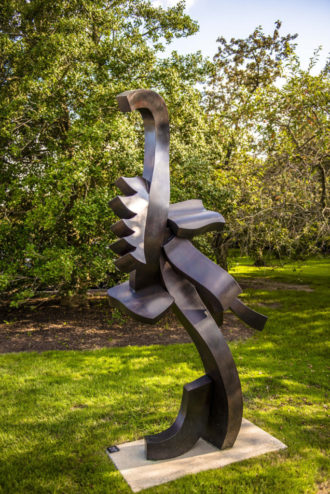