Born in 1931 in Jackson, Ohio, Benton received his undergraduate degree in fine art at Miami University in Oxford, Ohio. He left Ohio and began teaching at the California College of Arts and Crafts in Oakland in 1959. He also taught at the San Francisco Art Institute (1966-67) and at the San Jose campus of California State University (1967-86). His sculptures have been in solo and group exhibitions throughout that state since early in his career. Benton has also been given one-person shows in Belgium, Germany, Venezuela, Argentina, and Korea. Works by Benton are in the permanent collections of the Denver Art Museum, CO; Hirshhorn Museum and Sculpture Garden, Washington DC; The Milwaukee Art Center, WI, New Orleans Museum of Art, LA; Oakland Museum and Sculpture Garden, CA; Whitney Museum of American Art, New York City, NY and other major museums, universities and corporations. 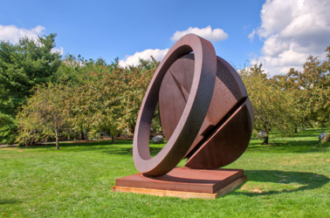