1.courtesy of the artist

Edwina Sandys is a prolific artist whose clearly recognizable style combines positive and negative space and a blazingly bright palette to powerful effect. Her subject matter confronts essential questions about politics and society, combining the lighthearted and the profound in ways that are at once playful and mind provoking.

The granddaughter of Sir Winston Churchill, Sandys was born and raised in England. Her first artistic achievements were in writing and illustration. She started painting in 1971 and was quickly invited to show her work at galleries in London, Rome, Zurich, Johannesburg, and New York. In the mid-1970s, she lived for a time in Italy where she began carving in marble. In 1977, she decided to live for part of the year in New York City to further her artistic development, and she gradually made the city her permanent home.

From 1979 to 1980, in celebration of the Year of the Child, Sandys created three monumental marble sculptures for the United Nations which are sited outside the UN Centers in New York, Geneva, and Vienna. She went on to create permanent large-scale outdoor sculptures in the USA, Brazil, Canada, and Ireland. Sandys’ work has been shown in many solo and group exhibitions throughout the United States, Canada, Europe, and Japan. She has received many awards recognizing her achievements, including the United Nations Society of Writers & Artists Award for Excellence and an Honorary Doctor of Arts from Westminster College, MO. She is the subject of a recent biographical documentary – One Bite of the Apple – produced and televised by PBS. Sandys lives and works in New York City and Palm Beach, FL. 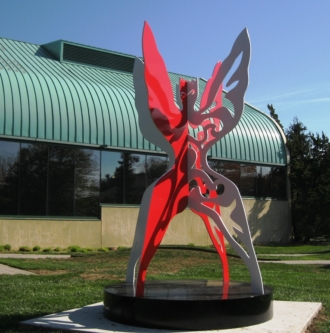