Carole Feuerman started her career as a sculptor creating super-realist resin casts of people in everyday situations. Her ability to recreate the effect of water on the skin made her figurative sculptures of swimmers particularly well-known. During the mid-1990s, Feuerman’s work took a dramatic turn towards a more abstract approach to the figure. One of her sculptures fell on her hand and caused enough injury to prevent her from being able to render the exacting detail that her super-realist work demanded. Her response was to move towards a more expressionistic and de-constructivist mode of sculptural creation. ‘Zeus and Hera II’ is an example of this new direction, called her “map series,” because they resemble topographic maps. The results create sculptures in iridescent shades of copper, gold, blue, and green. She calls it “painting with fire” and seeks to “portray the inner life of each image I create in order to capture the passion and sensuality of my subject.”
Raised in New York City, Carole Feuerman was educated at Hofstra University, Temple University, and the School of Visual Arts where she received a BFA in 1967. She commenced her career as an illustrator but started to experiment with sculpture when she began doing three-dimensional covers for clients such as National Lampoon and Rolling Stone. She began casting soon after and decided to become a fine artist. Feuerman has received numerous honors and awards including the Lorenzo de Medici Prize at the International Biennale in Florence, Italy. Notable private collectors include former Soviet President Mikhail Gorbachev, President Clinton, and Dr. Henry Kissinger. Her work is included in many public and corporate collections throughout the United States and the world, including Fort Lauderdale Art Museum, FL; Brandeis University, MA; Pepperdine University, Frederick R. Weisman Museum, CA; and Boca Raton Museum of Art, FL. Most recently she has won the First Prize in the 2008 Beijing Biennial and her monumental sculpture ‘Olympic Swimmer’ was featured in the Olympic Fine Arts exhibition at the 2008 Beijing Summer Olympics. 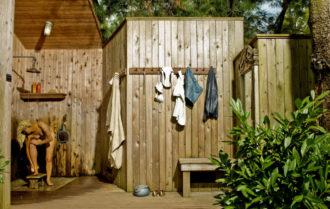