This prolific artist was a painter and sculptor whose works changed and evolved over the course of his life. Although born in 1916 in Russia, Alexander Rutsch was raised in Belgrade, Yugoslavia. His studies took him to Vienna, Austria where he trained to become an opera singer like his parents. In the 1950’s, Rutsch moved to Paris, where he became an influential force in the city’s art scene. In Europe, Rutsch studied with artists such as Herbert Boeckl, Josef Dobrosky, and collaborated with Pablo Picasso and Salvador Dali. In 1968, he moved to and settled in Pelham, New York.

Works by Rutsch are part of numerous private and public collections in Europe and the United States. For example, he is represented at the Albertina, the Belvedere Museum and the Academy of Fine Arts all in Vienna, Austria; the Palace de Beaux Arts, Brussels, Belgium; the Art of Liege, Liege, Galerie Espace, Paris, France; Belgium; Pelham Art Center, Pelham, NY; the Medical College of Pennsylvania in Philadelphia, PA; and the Museum of Modern Art in New Orleans, LA. In 1984, he was made an honorary citizen of New Orleans. Rutsch has been the subject of two documentary films, “Le Monde de Rutsch” (1966) by Jean Desvilles and “The Inner Eye of Alexander Rutsch” (1972) directed by Roger Seller. After his death in 1997, his friends, family, and supporters established and continue to maintain a generous fund in his name to finance a bi-annual juried competition in a variety of mediums through the Pelham Art Center in Pelham, NY, The Alexander Rutsch Award, that applies to the painting category. 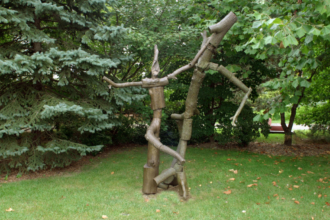