1.© photographer, Courtesy of the Smithsonian Institution Archives of American Art

Alexander Liberman was born in Russia in 1912, but his family relocated to London in 1921. After four years they moved again, this time to Paris. Liberman graduated from the Sorbonne, then studied painting and architecture at the Ecole des Beaux-Arts. He moved to New York City in 1941 and began a career at Vogue magazine, quickly rising to become its Art Director. In 1962, he became Editorial Director of all Conde Nast publications, a position he held until 1994. A parallel career began in the mid-forties when Liberman returned to painting, creating, gestural abstractions followed by hard edged geometric compositions. In 1959, he studied welding and was awarded his first solo exhibition in the following year by the Betty Parsons Gallery, where he showed his new sculptures along with the paintings. Liberman passed away in 1999.

Philip Johnson, the noted American architect, commissioned Liberman’s first large public sculpture in 1964 and the artist was granted many others in following years. Liberman’s works are housed in public collections at a number of prestigious institutions such as; the Albright-Knox Art Gallery in Buffalo, NY; The Art Institute of Chicago, IL; Hakone Open-Air Museum in Tokyo, Japan; the Los Angeles County Museum of Art in California; the Museum of Fine Art in Houston, TX; and the Storm King Art Center in upstate New York. In New York City alone, works by Liberman can be found at the Museum of Modern Art, the Solomon R. Guggenheim Museum, the Whitney Museum of American Art, and the Metropolitan Museum of Art as well as numerous other museums, college campuses, and corporate headquarters worldwide. Additionally, sculptures by this artist have been on view in many exhibitions, including one-person shows at the Jewish Museum in New York City; the Corcoran Gallery of Art in Washington, D.C.; Fort Worth Art Museum of Fort Worth, TX; and the Andre Emmerich Gallery in New York City. 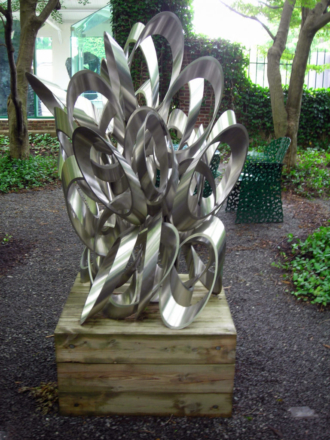