When Grounds For Sculpture opened its doors for the very first time, a small and highly dedicated team was in place. Alongside Brooke Barrie, Director and Curator, and Bruce Daniels, Project Manager, Brian Carey was one of the key contributors who made Seward Johnson’s vision tangible.

In 1985, three architecture firms were invited to create designs for the future GFS as part of a competitive process to find the right architect for the project. Two of the firms were based in nearby Princeton. The third was run by Brian Carey, an architect and restaurateur from New York who had experience working at The Johnson Atelier on his own small sculpture fabrication projects. This connection to the site proved to be a critical advantage. As Carey says, “It started when artist Herk Van Tongeren, the Atelier’s director, invited me to enter a site plan competition, which surprisingly I won.”

Like Seward Johnson, Carey saw the grounds’ inherent potential, and the idea to utilize its existing buildings was an especially important component of his proposal for the park. While Carey’s plans initially focused on GFS’ architectural elements, he expanded his focus to include landscape design, seeing the structures and the land and living things surrounding them as strongly connected. Carey and and the other members of the founding team worked tirelessly over many years to turn GFS into the lush and dynamic oasis it is today.

Carey’s firm, ACBC Associates, was based in New York City, where he designed residential and commercial buildings, gardens, parks, and restaurants, including Spring Street Bar, which he co-owned and which was the first to open in the newly established art district in Soho in the 1970s. He also designed several healing gardens for the Robert Wood Johnson Hospital in New Jersey.

His personal work has been shown in OK Harris and Kamikaze Gallery in New York City, the Robert Wood Johnson Health Center in Hamilton, NJ, the Elena Zang Gallery in Woodstock, NY,  and the University of North Umbria in the UK.  Carey served on the board of Metro Hort Group and the Queens Botanical Garden, where he was a member of the Advisory Committee and Horticultural Committee. He was also a long-time member of the Explorers Club and the American Alpine Club. 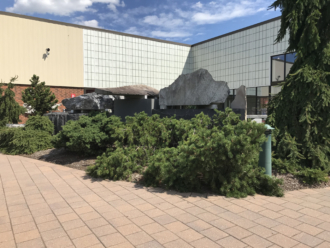